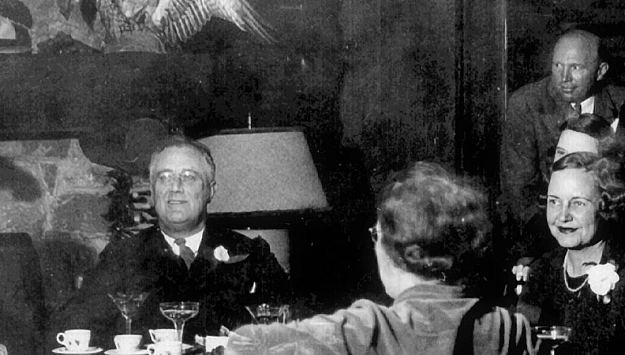 Cason J. Callaway, founder of Callaway Resort & Gardens, was born on November 6, 1894 in LaGrange, GA, the son of Fuller Earle and Ida Cason Callaway. Cason’s father was a self-made success in the business world, and by the year of Cason’s birth, Fuller Callaway had built a strong retail business in LaGrange and was just a few years short of running his first mill.

By the way people treated him, Cason quickly learned he was the son of an important man. However, his father told him not to get “puffed up.” His social standing only meant he would have to work twice as hard as anyone else. Fuller did not like the idea that his success would keep Cason from knowing the adversity that builds character.

For 12 years, Cason was the only child; his brother, Fuller Jr., came along in 1907. Cason’s mother, Ida Cason Callaway, treated her sons gently, and provided a balance to their father’s toughness.

Cason attended local schools and hunted, fished and went barefoot with the town boys. During vacation Cason and his brother opened stands selling Coca-Cola® and fried fish sandwiches. Cason also helped out at his father’s store. He and his brother each farmed one summer, selling and delivering their produce. According to Ida, “Fuller Sr. wanted them to learn which end of the mule kicked and which end of the bee stung.” At age 14, Cason went away to Bingham Military School in Asheville, NC. When he graduated, he was captain of his company, yearbook editor, president of the tennis club, and secretary of the YMCA.

After graduation from Bingham, Cason spent a summer in his father’s mills sweeping floors and wiping machines. Then he attended the University of Virginia in Charlottesville, but after the first year, it was decided business school would better train Cason to one day hold the reins at the mills. So Cason’s education was completed at Eastman Business School in New York. There, he studied harder than ever and delighted in the lessons of finance. After graduation, he applied for a job at the mills and was hired as a bookkeeper.

Life at the Mills

Once, while Fuller was away in Europe, his right-hand man asked Cason to manage a new waste mill where cotton dregs were converted to cheap rags and mops. Under Cason’s leadership, Valley Waste Mills began experimenting with weaving rugs from waste, and before long Cason was buying waste from mills in neighboring states. When Fuller returned from Europe and saw the mill was prospering, he took Cason in as a business equal, and the Board soon elected him treasurer of the mill group.

With prosperity came increasing challenges and pressures. Except for precious hours with his family, business was Cason’s whole life. When their father died in 1928, Cason and his brother, Fuller Jr., felt the weight of the company more than ever.

In time, Cason acquired financial control of the mills (through stock purchases) for the family. Soon he was carrying the entire load. He found new markets, expanded, and diversified. The mills grew from five plants to 14 and sent rugs, wiping cloths, laundry supplies, towels, trousers, and cord for automobile tires all over the world.

Cason served his country during World War I in the United States Navy. Shortly after he returned from the Navy in 1919, he met a young woman, Virginia Hand, at a party in Atlanta. He knew she was the woman he would marry, and indeed he did, in Virginia’s hometown of Pelham, GA, on April 3, 1920. Cason and Virginia soon had their first child, Virginia (“Jinks”) Hand Callaway, born in 1921. Three years later followed Cason (“Caso”) Jewell Callaway Jr. (1924), and then Howard (“Bo”) Hollis Callaway (1927).

During the Depression, Cason’s thoughts turned from cotton to his family retreat at Blue Springs near today’s Callaway Resort & Gardens, where the Callaway family enjoyed a cottage, private lake, spring-fed pool, a pavilion for entertaining, and horses. He and Virginia hosted many friends and dignitaries including President Franklin D. Roosevelt, who vacationed in nearby Warm Springs.

Cason’s projects at Blue Springs gave him freedom and a refreshing change. Finally, in 1935, Cason decided to leave the mills. He named his brother, Fuller Jr., president, and by 1938 retired completely from the cotton industry and moved his family permanently to Blue Springs.

With time on his hands and hundreds of acres of land in rural Harris County, Cason felt challenged to show this land could be farmed profitably. The same fortitude he demonstrated in the textile industry was now focused on agriculture at his Blue Springs Farm. He experimented with terracing, cover crops, and fertilizer to restore the soil, and raised a variety of animals and crops including cattle, chickens, ducks, quail, turkeys, strawberries, blueberries, muscadines, fish, and kudzu.

Cason became one of Georgia’s leading farmers and agricultural economists. He shared his knowledge and success with other Georgia farmers through a program he developed called the 100 Georgia Better Farms. In this program, 700 Georgia businessmen provided $1000 each to support 100 farms. Cason and county extension agents taught these farmers effective farming and business techniques. After three years, almost all the farms were showing profits, proving what Cason knew all along – that soil could be nourished and nurtured back into profitability.

A heart attack in 1948 made it imperative for Cason to slow his pace and would eventually lead him to leave the farming industry. With a desire to remain active, yet knowing the physical limitations he faced, Cason and Virginia turned to their undeveloped property and considered what they might do with it. Initially, they decided to develop a residential community for their friends and business associates. But as the land began to take shape as a garden under their careful attention, they felt it was much too beautiful for just a few people to enjoy. They longed to share their treasure with many people, so they decided to make it available to the public.

After much planning and planting and building, Callaway Resort & Gardens (then called Ida Cason Gardens) opened to the public on May 21, 1952. Unfortunately, Cason was hospitalized for a detached retina and was unable to attend the opening of the Gardens.

The remainder of Cason’s life was plagued with failing health and on April 12, 1961, he died of a heart attack in his home at Blue Springs. He worked until the day he died, completing a book manuscript, approving the final plans for the Ida Cason Callaway Memorial Chapel, and finalizing plans for Mr. Cason’s Vegetable Garden.